What is Code Quality Rank?

You need no technical qualification to understand what happens under the hood of your project. Based on analyzing 2.5 bln. lines of code and 172k repositories we found it possible to condense a code quality summary to the one letter rank.

The rating is a generalized source quality assessment result. We have determined that the rating will be most understandable for everyone if it’s expressed in letter gradation, as in schools and universities: the highest score is A+, the lowest rating is H. There are 15 marks only, so the rating scale is quite dense.

The goal of our product is precisely the elimination of controversies and disagreements through the provision of transparent and generally understandable information about the state of the codebase. The statistics we provide allow us to track changes in the quality of the source code in the dynamics both as a whole and by individual developers and specific technologies.

Our product is based on the idea of simplicity. Any person who doesn’t even have a special technical background, will be able to understand immediately what is happening with the codebase by just looking at the results of our analysis: is it getting better, or, perhaps, it’s only getting worse; see who and when introduced low-quality code or vice versa—has cleaned the Augean stables.

As a result of negotiations, such a global high-level idea has transformed into the idea of ratings.

How Does Rating Work?

As we have already mentioned, the rating is a generalized assessment. So, it generalizes something and consists of multiple parts. Yes, it is true.

We use SonarQube as a “backend” for collecting quality indicators of source code. And, therefore, the process of obtaining a code quality rating is quite simple:
Launch SonarQube; Obtain stats from SonarQube;
Feed the resulting statistics to our algorithm; ???
PROFIT!!! The rating is calculated!

So, as we have already found out, each commit and repository differ by the number of code lines used by technology and language, as well as the number and type of violations. Our goal is to make sure that the resulting estimates are independent of these parameters, in other words, so that you can:

For this purpose, we have used the following approach, which optimally meets our goals.

First of all, without a model and an approach, we can nevertheless easily compare repositories with the same or almost the same number of lines of code using the same programming language. And as the main criterion for comparison, we will have the number of violations of a certain type (Minor, Major, Critical, Blocker). 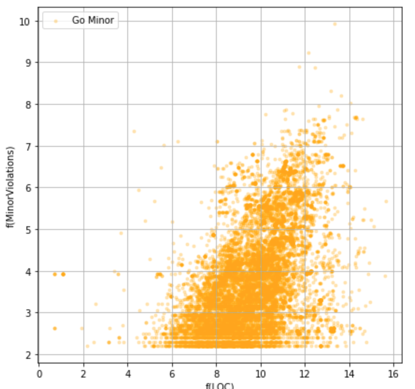 Let's finally look at the charts and discuss what we’ve got. The following graphs showhow the number of Minor Violations (vertical) differs for Java and Golang depending onthe repository size (horizontal).

Based on the charts, it is clear that with small number of code lines in the repository, the number of violations is still higher for Java, because, firstly, the graph of the point for Java is shifted to the left (towards fewer lines of code), and, secondly, it has greater height (i.e. more violations).

This data can also be viewed from another side. Let's see how violations are distributed in repositories with the same (well, almost the same) number of code lines. 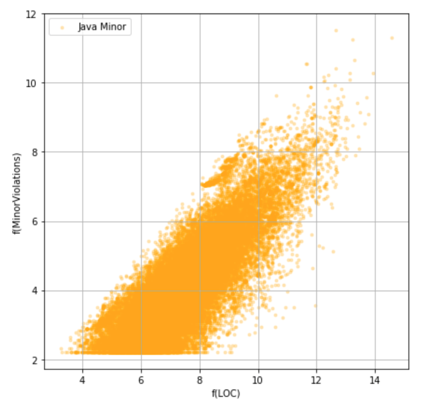 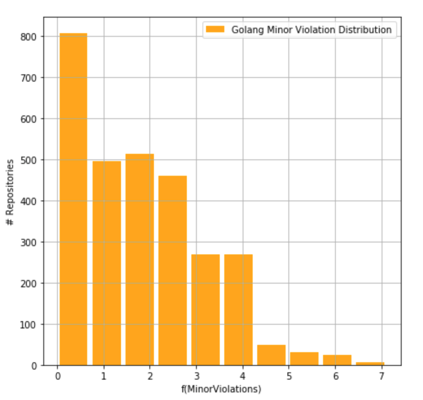 Fig. 3 - Number of Golang repositories having a certain number of violations 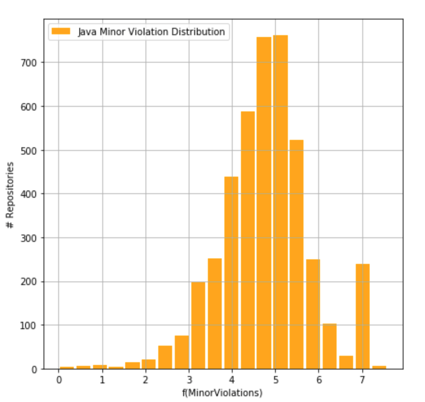 Fig. 4 - Number of Golang repositories having a certain number of violations

Figures 3 and 4 show that Golang repositories are characterized by the fact that a lot of repositories have an insignificant number of violations: the graph “sticks” to the left edge. A different picture is intrinsical for Java repositories: there is a “wave,” the top of which indicates the most usual number of errors in the repository of a given size. And this most characteristic value is much higher in Java than in Golang.

So, for the second time, we are convinced that writing simple code in simpler languages is easier!
And SonarQube confirms this. This is the proof that you have been waiting for.

How To Compare Repositories With Each Other?

Obviously, the repository containing no violations at all will always get the best rating. But what if, for example, there are ten violations in a repository? Is it a lot or not? It all depends on the number of code lines in your repository. If there are only ten of them, then this is not very comforting news for you! But if there are hundreds of thousands of lines of code, then this is already a fairly clean code. Is it possible to say that in this case, these two repositories are comparable in the code quality?

Our algorithm answers this question by setting an appropriate rating for the code quality depending on the number of lines, and number and types of violations encountered in this repository.

How to Compare Two Ratings For Different Languages?

It’s very easy! You simply compare the ratings with each other, without thinking about what language your repository is in, nor about how many lines of code are there in it! Our approach frees you from these worries! Repositories become comparable regardless of language and number of code lines!

Why Didn’t You Choose Another Approach?

We have experimented with different approaches.

The simplest approach was based on a simple comparison of violation density. But the key drawback of this approach was that it made it impossible to compare repositories using different programming languages. Such an approach, with all its simplicity, was limiting the possibility of its use by the framework of one language. Estimates became incomparable.

We have also experimented with well-known machine learning approaches—classification and clustering. But, as the practice has shown, and you saw it from the graphs above, there are no clusters in the distribution of the number of errors in the repositories.

Only the good old statistical approach was left, which we have used. Our approach is based on the construction of a multidimensional probability density function for errors in the source code, the level lines of which are our ratings. And this approach is working! Moreover, this approach fully satisfies our requirements for the rating system.

Pros And Cons of Our Rating System

What Does Honesty Mean?

Here I would like to talk about one case.

We’ve built rating models for different languages ​​and launched them on in-house production servers. As we work and scan the repositories and commits inside the company, we have accumulated some data displayed on our dashboard.

And then, something unexpected happened! It turned out that the ratings of Java, JavaScript, and PHP developers were on average worse than those of Golang developers! And, of course, the blame was on the DS department, which was said to set up these rating models, strongly discriminating individual languages ​​and technologies!

The DS department just pointed out that we had just really great Golang developers, without going into details. Such excuses satisfied the unsatisfied group only for a short time. And finally, when the situation was already quite tense and the people began to demand answers, the DS department started an internal investigation, the result of which is this article. The purpose of this article is to add transparency and clarify the understanding of the principles of the constructed rating system. After all, no one likes when their work is evaluated by some mysterious model that works, as it seems, like a black box.

- How to measure, check and improve code quality:

-- How To Check Code Quality?

-- How To Measure Code Quality

-- How Can I Improve My Code Quality

-- How To Build A Website With Good Quality Code?

What is Code Refactoring?

What Are Some Good Code Refactoring Tools